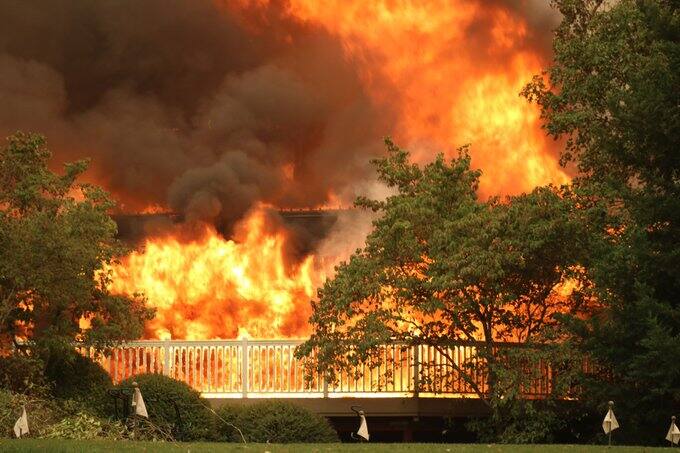 (The Center Square) – Areas of Napa County are under an evacuation order that states there is an immediate threat to life from a wildfire raging in the region.

Everyone other than fire and public safety personnel must leave the area immediately.

As of Tuesday night, more than 22,000 homes were threatened – at least 115 structures in Sonoma County and Napa County were destroyed.

Cal Fire says it has more than 2,000 firefighters working the Glass Fire but they are spread out throughout Napa and Sonoma counties.

The Glass Fire, wildfires occurring in Napa County near Santa Rosa in Sonoma County, has scorched 46,600 acres. So far, officials say they have only reached a 2 percent containment level.

The fire is destroying world famous resorts and threatening to ruin the state’s vineyards. At least 95 buildings have burned in wine country, including homes and winery installations, NBC News Bay Area reports. North, in rural Shasta County, a wildfire has destroyed another 146 buildings.

According to KTVU Fox 2 News, firefighters tried to save structures at the Meadowood Napa Valley Resort in St. Helena but several buildings on its 250-acre property were damaged. Only a chimney remains of its Michelin three-star restaurant, which was housed in its main building.

The luxury five-star resort, Calistoga Ranch, was also “extensively damaged by the fire,” according to a SF Gate report.

The Glass Fire hit midway through the northern Californian wine region’s traditional grape-harvesting season. As a result, many growers say they will forgo a 2020 vintage, Fox Business reports.

Even though the 475 vintners in Napa Valley account for only about 4 percent of the state’s grape harvest, they contribute to half the retail value of all California wines sold, according to a Reuters report.

“Most of (these firefighters) have been going since the middle of July, without rest, from fire to fire to fire here in the northern part of the state,” he said.

The Glass Fire started after firefighters had finally gotten the massive LNU Lightning Complex fire under control at 98 percent containment. Two months of fires had already burned hundreds of homes and charred 363,220 acres in Sonoma, Napa, and Solano counties before the Glass Fire began.

Since Sunday, more than 70,000 people in northern California have been forced to evacuate due to the Glass and Zogg fires.

Trump declared a major disaster declaration for California in August after a series of fires began.

Isaiah Lee, who attacked Dave Chapelle, was busted Thursday in connection with allegedly stabbing his roommate on De...

I paid 6.39/gallon for 87 unleaded gas ⛽️ & they are saying gas could go to 8 to 10$
THIS IS REDAYUMDICULOUS! #gasprices #Biden #inflacion
#Trending

A teacher at a school in Michigan has been placed on leave over an assignment showing former President Barack Obama with monkeys.